Skip to Main Content
It looks like you're using Internet Explorer 11 or older. This website works best with modern browsers such as the latest versions of Chrome, Firefox, Safari, and Edge. If you continue with this browser, you may see unexpected results.

Guiding you through the research process.

Plagiarism occurs when one steals or uses the ideas or writings of another and presents these writings or ideas as his/her own.

How to Avoid Plagiarism: In 5 Easy Steps

The academic articles and our own writing scholars generally list the following types of plagiarism:

The Web provides easy access to resources on how to avoid plagiarism.  Check those sources out if you have doubts as to your own ability to recognize whether you have plagiarized from a source.  Bottom line, if you quote it or paraphrase it (essentially everything you draft regarding the law will be one or the other) provide the proper citation to the correct source.  Failing to do so in the academic setting puts your grade in jeopardy.

Read this article by Stephen Moss from The Guardian. 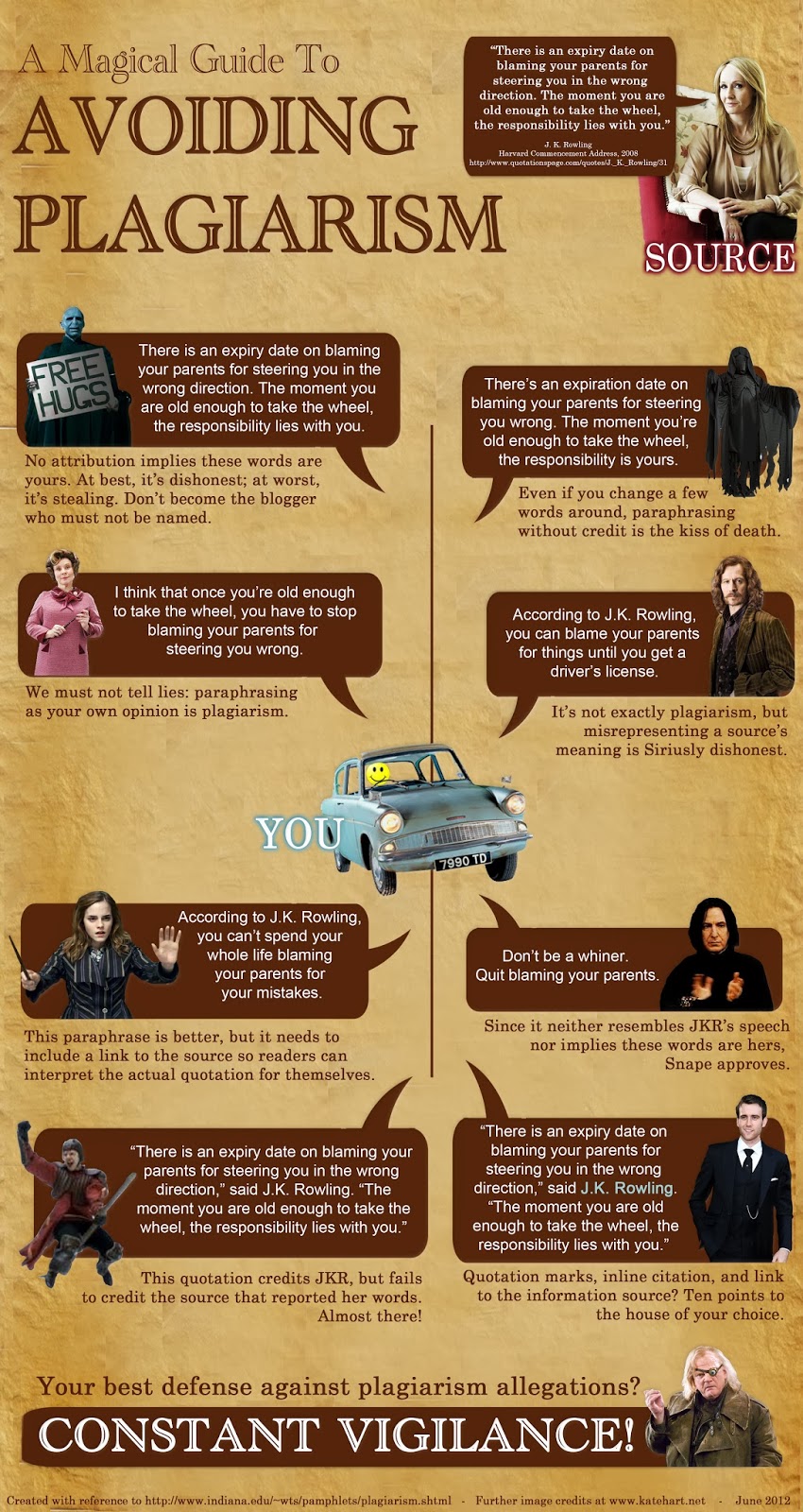 WHAT'S WRONG WITH PLAGIARISM?  by Michael Josephson
Plagiarism and her close cousins, cheating and resume fraud, are much in the news these days.  And while many are outraged, others are quick to excuse and minimize such conduct.  "What's the big deal?" they ask.

Well, first, plagiarism is a form of lying and fraud.  Often it's a form of theft as well but even if the person plagiarized consents, the act is fundamentally dishonest.  Those who take credit for the writings or ideas of others victimize everyone who believes the plagiarist's false claims.

Second, if plagiarism and other forms of cheating are treated lightly, more people will engage in such conduct more often.  Remember, what we allow we encourage and as the Internet makes plagiarism so easy it becomes even more important to impose consequences on cheaters serious enough to deter others.

Third, the reason to impose severe sanctions on people who lie and cheat is not so much to inflict pain on wrongdoers as it is to honor and uphold moral principles and protect honest people from being taken unfair advantage of.  When cheaters are allowed to prosper, we betray all those who have the virtue and courage to resist temptation.

Finally, all forms of cheating are habit forming.  What's more, cheaters inevitably lie to cover up their cheating, increasing the damage to their own credibility and generating toxic distrust and cynicism that undermines all of society.

"In brief, any act which represents work not one’s own as one’s own is an academically dishonest act. If a student is ever in doubt about an issue of academic dishonesty, or has any hesitation about a contemplated course of action, the student should consult his or her instructors. The penalties for academic dishonesty can be very painful and can affect the entire educational experience at Illinois Central College."

As a part of Blackboard, your instructor may use Safe Assign as a way to check for plagiarism.

"SafeAssign™ is a plagiarism prevention service, offered by Blackboard to its Blackboard Learning System Enterprise, Vista Enterprise and CE Enterprise clients.  This service helps educators prevent plagiarism by detecting unoriginal content in student papers.  In addition to acting as a plagiarism deterrent, it also has features designed to aid in educating students about plagiarism and importance of proper attribution of any borrowed content." From the Blackboard SafeAssign website